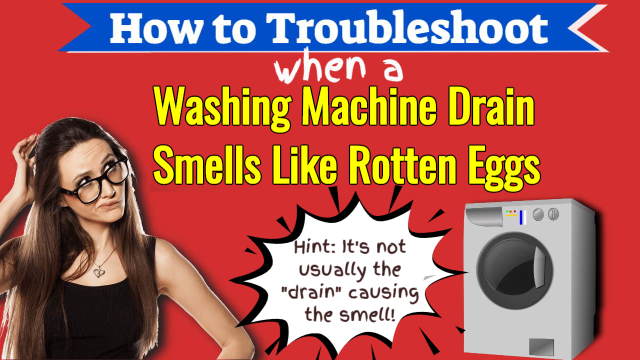 If a washing machine drain smells like rotten eggs – it is not nice!

In this article, we will explore the likely causes of sewer smells from washing machines and suggest how to cure them without calling a plumber.

In most cases, we have found that the above statement is often more accurately described as “washing machine smells like rotten eggs when draining“. There is a reason for it and a cure! Read on:

The Problem When a Washing Machine Drain Smells Like Rotten Eggs 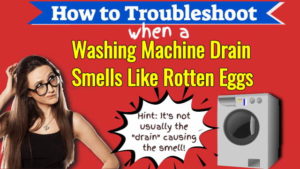 Have you noticed a sulphurous rotten-egg type of smell emanating from your utility room lately?

Indeed, if your washing machine drain smells like sewage you don’t need us to tell you it is horrible!. The stench can easily make your cleanroom into a place that you’d rather not go near.

It’s akin to breathing in sewer gases and in time, if allowed to continue, it can be detrimental to your health. No need to be concerned though, we are here to help you diagnose and correct the problem quickly on your own. The chances are that you won’t need to need to call a plumber after reading and acting on what we have for you here.

This problem is occurring every so often to everyone who saves energy on their washing machine. Using low-temperature washing machine detergents no longer prevents the growth of bacteria and fungi in the way very hot water once did.

Drain smells like sewage occur every once in a while, no matter how clean a home you run. But, thankfully, the solution is relatively simple.

How do I get the rotten egg smell out of my washing machine? you ask.

Why does my drain smell like rotten eggs? is also a common question.

It might seem impossible to some people that their home could produce washing machine smells like sewage. In fact, sewage smells only need the combination of a food source and air-less (anaerobic) conditions to appear once sulphur reducing organisms become established.

“Why does my washer drain smell of rotten eggs?

“How on earth can I be getting a stagnant water smell from a washing machine?”

is another puzzle to so many people!

Causes of a Washing Machine Starting to Smell Like Rotten Eggs

The likely cause is a build-up of dirt, calcium deposits from hard water, and soap. Over a period of time, there will have been a slow build-up of mold, which some call “mildew”.

Most often it accumulates in the washing machine tub drain plug and hidden away between folds of the rubber door seal which holds the water in the tub between the tub itself and the glazing of the door. There is good news here because it is slow-growing and that easy to get rid of. Do it yourself and you won’t need to call a plumber.

If you have a front load washing machine and you are smelling a rotten egg type of smell, then this could be caused by many different things.

Front-loading washing machines all have a rubber seal, it is highly flexible (it has to be) but easily get folded back on itself making an airless space for mold to grow. This effect can be worsened as from time to time a small object such as a sock or handkerchief can be caught inside a fold in the seal and remain unnoticed for weeks on-end.

When that happens, the item sits in there, stays wet, accumulates dirt, becomes moldy, and the smell starts.

To cure a stagnant water smell from a washing machine, push the washtub back on the rubber seal between the front loader door and the tub, and take a look.

The area around the rubber will very likely have developed a quite hard-to-remove deposit of dirt, soap scum, and mold. Over time bacteria and/ or fungal growth does tend to build up. This is thought to occur because there is very little air while the washer stands idle between washes. The result is that this deposit lets off a stinking odour.

It follows that the simple cure can be that after each use you leave the washing machine door open for several hours to give it a chance to dry.

For most users that will solve the problem. But even better, is to wipe the seal every few weeks, with a cloth to remove any deposit which may be starting to accumulate.

Heavy users and those with a family which for example washes very dirty clothing, such as winter-time rugby-kit, should check the seal area often. And, if you are doing frequent washes we recommend giving it a good wipe-down at least once a fortnight.

This should prevent mildew and mold from forming on the rubber seal.

It is recommended by washing machine manufacturers that you run your washing machine at least once every two months on the hottest setting, with only bleach in the washtub.

To find the “high-heat setting” look for something on the dial or settings-screen called a “Sanitary Cycle”, or “Clean Cycle”, depending on which model of washing machine you have. Some also recommend regular use of a calcium build-up preventative such as Calgon.

You might think that the action of cleaning clothes would keep the machine itself clean. But, that’s not entirely true. Running a “Clean Cycle” every so often will help keep the washing tub, pump, and drain lines deposit free and odour free!

What if the Smell Is Coming From the Sewer?

Despite the smell being so much like a sewer smell it isn’t usually coming from the house drains. However, it could be in some circumstances, and you may wish to check that it isn’t!

It isn’t usually permanently connected. Lift out the washing machine hose, put your head down close, and smell the top of the drainpipe. You’ll know immediately if the smell is coming from there!

If the drain is the source of the sewer smell, there is something wrong with the layout of your plumbing. There should be a water-trap (P-trap) between the top of the pipe you just sniffed and the house sewer. That water trap should be preventing any significant odour coming up from lower down the drain or from the public sewer itself.

A venting problem may be causing water to be sucked out of the P-trap. Whatever is the cause it’s not likely to be something the average householder can solve. Generally, at this point, you would be well-advised to call a plumber and get this fixed.

But, it is just possible that the standpipe itself is providing a home for odor-causing bacteria. So, assuming that you have already cleaned the rubber seal as suggested above, we recommend one last action before calling a plumber, is to clean the vertical washing machine drain pipe.

Do this by pouring a half cup of baking soda into the standpipe and following this with half a cup of vinegar. This time-honoured recipe creates a disinfecting foam that kills the bacteria. If the smell still persists, you would probably do well to call a plumber.

Constantly washing at low temperatures and with small amounts of detergent can lead to unpleasant smells in the machine or on your laundry.

Take care to wash regularly at 60° C or higher and keep to the right dose of detergent, in accordance with the manufacturer and amount of laundry. In addition, we recommend using the Bosch tested washing machine cleaner to avoid all types of smells. via www.bosch-home.co.uk.

Check where your washer’s waste pipe (flexible hose) meets the plastic waste pipe under the sink. It should join from above, rather than reach up to the join from below, this stops any manky water from the sink from doing dishes flowing straight down into your washer and sitting in it. via www.mumsnet.com. 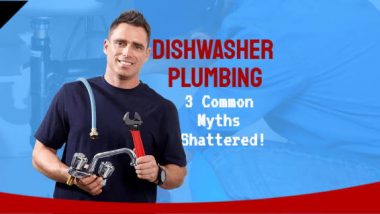 Dishwasher Plumbing: 3 Common Myths and How A Dishwasher Works