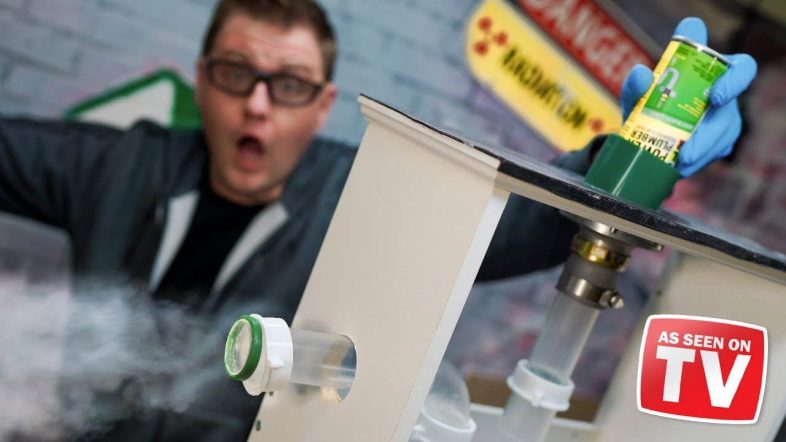 As Seen On TV Plumbing Gadgets… Do they really work?

There are many new gadgets appearing in most markets, but do they work as claimed in the advertising? The fact os that some do, and others don’t.

As Seen On TV Plumbing Gadgets Do they work?

If you own a home and your plumbing toolkit consists of little more than a lone sink plunger, chances are sooner than later you’ll need to tap into the knowledge or advice from someone versed in common plumbing repairs, and fixes. While a plunger can be handy in several different scenarios, it won’t always work. There are some apparently nifty new gadgets which could great plumbing tools as seen on TV, but they could just be pretty useless when bought!

Without knowledgeable plumbing advice on hand to face a plumbing problem head on, the would-be DIY drain unblocker can only guess.

In such situations you are in no position to judge which pieces of plumbing equipment and fixtures to tackle bathroom and drainage system upgrades. You need helpful reviews of each, and if possible demonstrations of what each one does. If this is you watch our video and read on!

3 Best As Seen On TV Gadgets Put to the Test

You’ve probably seen commercials for various products that claim to unclog your drains, clean your pipes or even remove years of food and fat buildup. But do any of these as-seen-on-tv solutions actually work?

Well you’re about to find out that there’s a multitude of products around that blast air down your drain and supposedly unclog it.

But unless someone reviews each product to find out how effective are they, nobody knows.

So, let’s find out first with a product called Plumb Away.

Included in the Plumb Away kit is an extension handle. A canister with a cap into which it is installed. There is also a universal adapter provided, which is designed to fit nearly any drain.

Using the Plumb Away is really simple.

Just place it over your target and give it a firm press, to fire it off.

OK. Not every plug hole will be sealed with the universal adapter which comes with the Plumb Away, in the normal position. However, it can be removed and reversed. Just flip it over to fit it down your drain if the first setting does not work for you.

For those applications where the drain-hole is flooded by un-drained sink water, you can just slide the extension handle right over the base of the can and make the device do its job without getting wet.

Plumb Away As-seen on TV Drain Unblocker Test and Review

Now for the practical experimental testing we created a makeshift drainage system out of this modified bathroom sink set-up. To test the Plumb Away in a real-life situation, we’ve even added in clear drain pipes and added a real-U-bend. It’s just like a real sink plumbing system.

Now all we need to do is to create a life-like drain blockage, and try-out the Plumb Away device.

We did that by balling up some paper towels in conjunction with some water and egg and some savory grease! That’s right a “mini-sewer monster” was made to put the Plumb Away to the test.

This tasty (Lol!) treat was then mashed into a cylindrical shape and skillfully shoved through the pipe and into the p-trap. For good measure, the clogged-up U-bend (P-trap) was topped off with more “delicious” (I don’t think!) slurry. It was then left to sit-it-out for about half an hour. When the time was up, a little colored water was added to the pipe to confirm that the simulated pipe blockage was firmly lodged into place. We found that it was preventing any flow whatsoever.

With that, all that was left to do was to shake up the Plumb Away canister and position it directly over the drain. With the Plumb Away in place over the plug-hole, I just pressed down on the canister firmly.

Test Firing the Plumb Away! 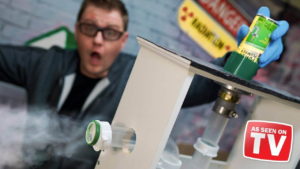 Now, it is fair to say that when activated the Plumb Away fires a powerful jet of air. It sends a shock-wave of CO2 gas right down into the pipe. The result was that it forcefully expelled all the matter forming the blockage. After running this Plumb Away thing several times, I’ve got to admit the results were phenomenal. Using the Plumb Away is completely effortless.

The job of unblocking the U-bend was done in a flash! All that was left was to run some more water through the pipe and give it a final blast spilling any remnants and making way for our next test. this will be a test and a review of the Green Gobbler.

That’s right folks this Green Gobbler is in fact and emulsifying packet of chemicals which it is claimed will clean your pipes in an eco-friendly way.

Once you get the contents of the U-bend blockage out, you’ve got the final of our 3 Drain Unblocking solution gadgets!

This one is called a Drain Snake, but enough about that at the moment as we are testing the Green Gobbler right now.

My thoughts on this one, the Green Gobbler, are that although there are some instructions provided. You don’t really need the instructions, because they’re actually printed right on the exterior of the packaging.

The commercial claims that the Green Gobbler works on grease, organic matter, and paper among other things. Therefore, we decided to emulate this blockage using a strip of cardboard which was dipped into our slurry bucket and un-ceremoniously jammed into the end of the pipe thumb style until it was lodged in the U-bend. This we did after moving the grease, organic matter and paper into position in the U-bend, along with additional “clogged U-bend creating” cardboard.

Adding some green water revealed that a full seal hadn’t been created by the “blockage so far”, and a few drips were getting through past the clogged up zone.  To stop the flow of even a few drips, a few paper towels were then screwed-up, and inserted as a final plug in the water flow.  Green Gobbler fluid is provided in the kit we had bought. This we poured into the sink-drain and filled the U-bend drain pipe, right up to sink-plug level.

The Green Gobbler solution was then poured down the thoroughly blocked plug-hole into the sink-drain a little bit at a time. Followed by a little hot-water to fill it up it up. And, we hoped that action would kick it the Green Gobbler fluid into a high gear.  We thought this was the thing to do since the video ad for the product showed a time-lapse of Green Gobbler in action.

Did the Green Gobbler Really Gobble!

In that video the Green Gobbler solution was stirred and left for a half hour to see how much damage it could do to the blockage. Therefore, we did the same, and we waited.

On our return we hoped that the Green Gobbler product was going to satisfactorily resolve the problem. It didn’t. Maybe, our simulated pipe blockage failed to emulate a real-blockage, but all we can say is that it didn’t do the trick and unblock a blocked drain for us in our U-bend, during our test.

Unsuccessful Product:  Green Gobbler (This was only 1 test. It may work 100% in other circumstances.)

In real-life blockages there is often an awful smell. A smell which you worry, is going to return with a vengeance just like John McClane (Bruce Willis) in my favorite movie, Die Hard 3.

The Drain Snake Test and Review

The Drain Snake Test was conducted on the remaining blockage when the Green Gobbler solution failed to dislodge the blockage. The Drain Snake is a semi-flexible length of plastic on the end of a handle. The whole plastic gizmo is made to look a snake shape, and the handle double as the snake’s head. The Drain Snake took a few moments of waggling around down into the blocked U-bend. It disrupted the congealed fat previously poured into the drain from the sink, and with upward and downward motions also then applied, the blockage drained away under gravity. 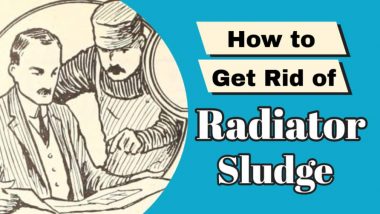 How to Get Rid of Radiator Sludge