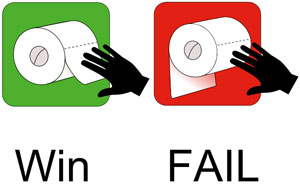 The Vexed Question of Toilet Paper Orientation Re “Brandweek 2009”

Toilet paper can be placed in a horizontal toilet roll holder in one of two positions, those being with the leading sheet either “under” or “over” the roll.

Some people say that “under” provides a tidier appearance, in that the loose end can be more hidden from view.

Others say that over is easier to pull, and the “commonsense” orientation to use. Many of the best hotels tend to hedge their bets, and provide multiple rolls and both orientations, just to play safe and avoid annoying their guests.

Most people don’t even notice whether their rolls are orientated under or over, and until the matter is raised with them. The entire lifetimes of many people take place without them ever concerning themselves about such apparently trivial matters. Others think that there should be a definitive “answer”.

The Wikipedia page on this subject contains a citation link to a Brandweek 2009 article, however, that article is no longer available, and this article has been researched as a substitute, in order to provide a citation for the subject of toilet paper orientation under or over. It also cites articles about a sketch in the US TV Series “Seinfeld”.

Toilet Roll Holder – Toilet Paper Orientation Over or Under – Which is Best?

The closest we were able to find to an “expert” opinion on the over or under toilet paper orientation issue is from  a US Mechanical Engineer Erik Seidel, who developed a softer toilet paper tissue in the 2000s. He also researched the minutiae of toilet paper use, and has successfully developed toilet paper products which are said to achieve higher sales volumes, and improved profitability, through pandering to the way in which people use their toilet paper.

Erik Seidel is quoted in Adweek (May 3, 2009) as saying the following:

Seidel remains focused on every detail that has to do with tissue — which, of course, leads to the eternal question: Is it better to load toilet paper rolls so they feed over the top or underneath? “That’s a key debate in my house,” Seidel admits. “The ‘under’ looks cleaner and neater because you don’t see it. The ‘over’ is more convenient.” via Adweek

For those of us who watched Seinfeld over the years, it is hard to forget the famous “can you spare a square” episode, where Elaine runs out of toilet paper in a public restroom. She calmly asks the woman in the stall next to her if she could borrow some. The woman says “no.” Elaine then asks if she could spare just one square. As funny as this scene might have been in the context of a sitcom, it is not so funny in reality. Just ask jail inmates in Wichita, Kansas.

Now we know that this subject is necessarily about how to find a bail bond in Kansas or really a topic for the top bail bond blog on the internet, but we thought it was pretty funny. Inmates in Sedgwick County Jail are being forced to cut back on toilet paper. Thanks to a budget of over $100,000 on toilet paper each year, the jail is now looking at ways to best maximize their resources, or in this case, toilet paper. All inmates will be allowed one roll a week. Inmates claim that this is not enough, but authorities at the jail claim that one roll should definitely be enough, as long as inmates use the product for its intended purpose and not to throw giant spitballs or purposely clog the toilets. Either way it seems like a pretty crappy situation for both sides. Read the original story below. via Twitter

How often have you been stuck in a public bathroom stall with no toilet paper after doin’ your business? What do you do? This embarrassing situation is common among all of us but rarely talked about. I’m here to expose the already exposed, but in a slightly different way.

Peer underneath the stall walls to see if anyone is there. But make sure you don’t peer too far because you don’t wanna invade anyone’s privacy. If someone’s there, you’re set. Ask them if they can “Spare a Square,” as Seinfeld’s Elaine says, and you’re set. via Trendhunter.com

Industry Background: Toilet Paper Usage in the US & the Environment

The average American citizen uses about 57 squares of toilet paper per day and 23.6 rolls per year, producing about 50 pounds of toilet paper waste every year. The United States’ spends more than 6 billion dollars a year on toilet paper with developing countries quickly increasing their own consumption.

The truth of the matter is that toilet paper puts us right in the middle of an existential-environmental dilemma: how can we meet one of our most basic hygienic needs without destroying our planet? Paper production is environmentally intensive, transportation costs require a lot of fossil fuels, and most toilet paper ends up in sewage systems rather than being recycled. via Marshallnews.com

Bathroom Toilet Etiquette in the Workplace

Bathroom etiquette in the workplace is always tricky. I mean, we’re there for HOURS, so it’s fairly obvious we are going to have to go at some point. Yet the only thing more awkward than passing a colleague in the hallway as you’re both on your way into the bathroom, is passing them on the way back out again. Did he wash his hands? Is there toilet paper stuck to the bottom of my shoe? Or worst yet, what the hell is that death smell leaking out around the door?

As a formerly stay-at-home-mom, I have a higher than average appreciation for the office john. Before I had kids, I would often choose to wait until I got home…even when I was working 12 hour days. Now that I have kids, even if I were only in the building for 20 minutes, I can guarantee you that 3-5 of them would be spent sitting in silence behind the locked door of the ladies room stall. When you add in my American bladder’s inability to hold bulk quantities of English tea, it is fairly safe to say that I have a vested interest in making sure that things run smoothly. via Nomadmomdiary.com

Everyone has been caught in the bathroom with their pants down and no toilet paper but Cuba is in deep doo doo. In the grip of a serious economic crisis, Cuba is running short of toilet paper and may not get sufficient supplies until the end of the year.

Apparently, using newspapers photos aren’t the only paper citizens have been using in the toilet even before the The Cuban T.P. Crisis. According to an anonymous blogger, Cuban university history books are often missing entire pages that once contained images of communist leaders and, we’re guessing, George W. Bush. via Heirloomquiltingdesigns.com 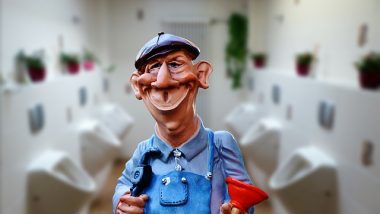 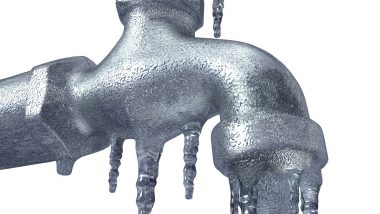 Plumbing Tips for Winter: Winterizing and the Thermostat War